How to Overcome Workplace Mistakes 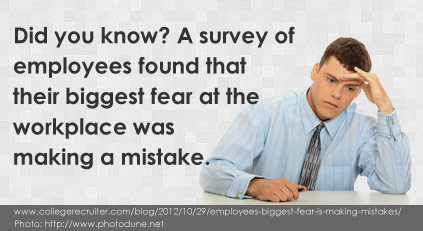 Oops! You just completely messed up your presentation. Or you called your boss’ second wife by his first wife’s name. Or you inadvertently insulted a client. These are all workplace mistakes. You may be wondering how you can recover from them, or if can you recover from them.

Fortunately, you can in most cases, although you might have to deal with a little embarrassment. Here are some suggestions on how to overcome such bloopers and blunders:

Fix it as soon as you can if you can

The moment you realize you made the mistake, like accidentally sending a direct message on Twitter meant for one person to all of your Twitter followers, fix it right away. In such a case, that would mean deleting the message as soon as you realize your mistake.

Of course, many mistakes are not easily fixable. But you need to do whatever is reasonable to fix the mistake, even if it means you will be burning the midnight oil to do so. That is part of owning your mistake.

Be a stand-up guy or gal and admit when you did wrong. With our example above, you can send some sort of message acknowledging your errant tweet. In addition, you might want to keep your manager informed. Obviously, if it’s an extremely minor mistake, you don’t need to run to your boss. But if it is something that could potentially get your department some heat, you should give a heads-up to your manager over it.

For example, if you ran a report with errors, send out a note to everyone who received the report letting them know, and include a revised copy of the report. Also cc your supervisor on the correspondence.

If it is a major mistake, and fixing it could be extremely labor-intensive on your part, you still should offer to put in the work to fix it, and tell your boss that. Of course, your supervisor may not want you spending so much time doing so, but at least you should offer to do so.

Also, don’t forget to say that you are sorry. And don’t throw anybody under the bus for your mistake, even if others were partially responsible. Own it.

Learn from your mistake

Some bosses have the policy that they will accept mistakes – they want to encourage trying innovative ideas after all – but they don’t want to see the same mistake twice. The idea behind that is that staff can be unafraid to fail, but responsible enough to make sure they don’t fail again in the same way.

So when you make a mistake, do a mental inventory about what you have learned from it, and what you can do so to make sure you don’t make that same mistake again. This will help you get something positive out of your workplace blunder.