Ways to Get Your Staff to Get Along 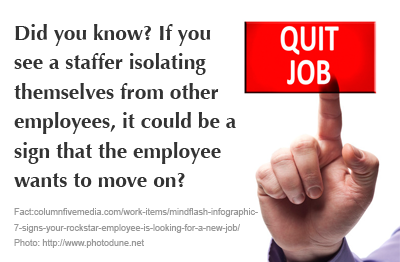 Tension between staff members can interfere with getting work done. It can be an unnecessary distraction, or worse, if the staff members are supposed to work on a project together and are unable to do so.  While it may be difficult to prevent any problems, there are steps you can take to minimize the number of conflicts.

Who is in charge of which tasks? Who is responsible for which deliverables? If the lines are not clearly drawn, you risk running into problems.

Other employees may do less than their share, either because they honestly think they are doing what is expected of them or because they are taking advantage of the uncertainty with regard to roles and responsibility.

If your employees feel that the work is being divided up unfairly, there could be hard feelings between them, as well as toward you.

Making sure everyone knows their role and duties before a project gets underway will head off conflicts later.

If someone in the office has a problem with someone else, he or she should feel that they can come to you and that you will be willing to listen and be empathetic. Maybe there is something you can do to rectify the situation. Maybe the employee has drawn attention to a larger issue in the office that, when resolved, will also resolve the interpersonal conflict.

Where feasible, encourage employees to work out their issues themselves

Once you have met with both sides in a dispute, you may find potential for common ground and compromise. It may be beneficial to bring both parties into your office and empower them to work to resolve their differences themselves.

But if you feel that one or both parties have a bad attitude and it is all too obvious why there is a problem, it could be counterproductive to try to let them work things out themselves.

Keep the main goal in mind

Ultimately, the goal is to get the work done properly and efficiently.  While staffers do need to be able to work together, they do not necessarily need to be best friends.  Don’t put trying to get people to like each other ahead of getting the work done.  Keep your priorities straight and make sure your staffers understand their priorities.