Why You Should Begin With the End in Mind 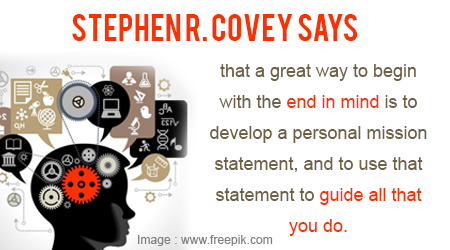 Did you know that Matthew Weiner, creator of the popular TV show Mad Men, already knows how the show will end, down to the last shot? And that many authors write the endings of books first, before they get going with the beginning? That is what is known as beginning with the end in mind, and it is not just a force in creating art. Begin With the End in Mind is the second habit of Stephen Covey’s legendary book The 7 Habits of Highly Effective People.

Covey writes that “Habit 2 is based on imagination–the ability to envision in your mind what you cannot at present see with your eyes.” The idea behind beginning with the end in mind is “based on the principle that all things are created twice,” Covey says. “There is a mental (first) creation, and a physical (second) creation.”

Think about it – professional athletes visualize everything they do, before they do it. Boston Red Sox legend Ted Williams, one of the greatest hitters of all time, used to practice his swing in the mirror over and over each day, constantly working on it. And athletes were once children who imagined throwing a touchdown in the Super Bowl, or hitting a walkoff home run in Game 7 of the World Series. When New York Yankees star Derek Jeter was a child, he had a goal to be shortstop for the New York Yankees, a goal he achieved when he was 22 years old. They began with the end in mind.

Beginning with the end in mind, like those athletes did, can help you in a variety of ways, and keep you from bad behaviors as you keep your eyes on the prize. Here are some examples:

If you want to lose weight, find a picture of yourself from thinner days and use it as inspiration. Or buy an outfit that you want to be able to fit into one day. If you have always been overweight, imagine what you would look like thinner, and think about what it would be like to reach that weight.

Many people come up with a fitness goal that can spur them on, whether it be to run a marathon, lift a certain weight, or even just achieve a level of fitness, like being able to run for the bus without getting out of breath.

Visualizing what you want to achieve in your career can help you in times when you want to give up. If you want to be a doctor and save lives, focusing on that goal can get you through medical school.

One of the top ways people can help begin with the end in mind is with a career coach. To learn more about what a career coach can do for you, click here.